What the World is Coming To

Posted on December 14, 2012 by okiegirlunleashed

I’m going to break from the traditional topic of my blog (traveling) and talk about something that hits a lot closer to home this time. It’s been weighing on my heart lately and this is best way I have to get my thoughts out of my head and put to paper. Well, virtual paper, anyway.

As more and more bad news rains down on us, I keep hearing people ask, “what is the world coming to?” We just made it through a nasty and divisive election. I’m still seeing Facebook posts from my friends who are mad about the outcome and aren’t ready to move on. We’re feeling more divided than ever. Every day, we hear about the looming fiscal cliff and we’re the unwitting Thelma and Louise all packed in the convertible, zooming toward the precipice. Additionally, we have the conspiracy theorists saying that the government is out to get us, making us paranoid. I haven’t even mentioned the upcoming Mayan doom, asteroids hurtling toward the Earth, or North Korea’s nukes yet! Is it any wonder that we are feeling that the world has gone mad?

Earlier this week, we heard the horrors of the mall shooting in Oregon. Thankfully, the shooter’s gun jammed and only two were killed, plus the shooter. But still, two families must spend this holiday season and every one from now one without their loved ones. Not to mention the guilt and pain the shooter’s family must be feeling. As I write this, specifics are still coming in about the shooting at an elementary school in Connecticut. Details are still sketchy but it is certain that dozens of innocent people lost their lives, among them a classroom full of kindergartners.

I watched a video on my friend Amy King’s Facebook page that has haunted me for days. It showed a dog that had been hit by a car being dragged to safety by another dog, across several lanes of traffic. The awesome little guy risked his life to save his furry friend! So heartwarming! I had seen that video before but that wasn’t the haunting part. It was juxtaposed with another video from another country. This video showed a little girl that was being run over by a car. She lays in the street. Others drive by, literally step around her, drive around her, but no one helps. Finally, someone comes and moves her out of the street but does not give her medical attention. They just move her off to the side and leave her lying there. Finally, after what seems like an eternity, someone comes and carries her away. The video says that she was 2 years old and died from her injuries.

I’d like to dismiss this and think that something like this would never happen here. But, would it? We’ve become a society that seems to kill each other so freely. Recently, one man pushed another onto subway tracks and he died when the train hit him moments later. No one helped. Where do we draw the line? How can we fix it? When will it stop? I don’t pretend to have all of the answers and I would love any and all constructive comments here. But I have a few thoughts.

First, I own guns so I’m not going to get into a debate about them. But, it does seem that our society much too readily skips past all of the options available to resolve our differences and goes straight to “I’ll kill ’em!” Whatever happened to talking, arm wrestling, arguing, slapping, dance offs, drum battles, rock/paper/scissors, or even a fist fight? Heck, taze them if you must. But, do we really have to resort to such a permanent solution as death to solve such a temporary problem as a dispute? It just seems like we don’t value human life anymore. Instead, I wish that we would use deadly force as an absolute last resort, only when all other avenues have been exhausted. There are so many other ways to solve differences rather than killing someone.

Second, we’re so angry all the time. Maybe we need more mandatory yoga classes in every community. I saw friendships end during this past election and some barely survive the college football season simply because we were rooting for different sides. Can we no longer allow people to have an opinion that differs from ours? I’m all for being passionate about your beliefs but when you get to the point that you dislike people simply because they don’t agree with you, I think you should take a step back. Our national media and talk show hosts who get paid millions to fuel your fire only make this worse. They blow stories out of proportion, spin things to sensationalize, and rake in the ratings all to raise your blood pressure. Meanwhile, you’re left feeling angry, paranoid, and very much feeling the “us vs. them” mentality that they perpetuate. But, the “them” is your fellow man, living in your community, and maybe even under your roof. Be passionate! But when you approach anger, nastiness, hatred, or bitterness it’s probably a good idea to examine why you’re feeling that way and step away from the situation that is making your blood boil. Change what you can but fuming about things beyond your control is fruitless and harmful to your well-being.

I am a Christian and every time something tragic happens, I just feel that the world needs God. Our pastor, Mark Foster at Acts 2 United Methodist Church in Edmond, taught us a sermon recently about the number of times in the gospels that Jesus says “Be Not Afraid.” I just kept thinking during that sermon that so many people would be comforted by that.   I’m not a preacher and I’m not going to become one now (I’ll leave that to the experts) but I do believe that if we put our faith in God instead of man, we will feel a lot more secure.

So, how do we fix it? Well, we can start by using Jesus as an example. He accepted others (even sinners-aren’t we all?) and treated people with kindness, love, and compassion. It’s really simple-be nice to one another. “Do unto others as you would have them do to you” Luke 6:31. I mean, how simple is that? But, how badly do we mess it up?  Why can’t we live it? If you aren’t a Christian (you’re welcome to come to church with me!) some form of this Golden Rule can be found in basically every religion and society since the beginning of time. Even though it is the easiest concept to grasp, we just can’t seem to stick to it. If you don’t agree with someone’s lifestyle, condemning them isn’t the answer. Lucky for us, judging is God’s job so you are relieved of duty. I believe that you can lead many more people to Christ through love than through finger pointing and scare tactics. By the way, the Golden Rule does not give you license to be crappy to people that are mean to you. It tells us to treat people how we want to be treated. 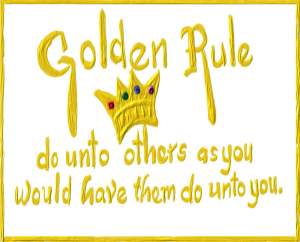 Each and every one of us can make an effort to change society today. We ARE society. I don’t think any of my friends reading this are going to snap and go on a rampage next week but you never know what is going on inside those you work with, those in your family, that woman you pass in the grocery store, or that man you refuse to let on the ramp in traffic tonight.  You don’t know what a smile, a kind word, or a prayer can mean for someone, or the difference you can make in someone’s life. It may seem like a small thing but if we had more compassion for our fellow humans, I think it would go a long way toward solving this blackness that we seem to have hanging over us. Let’s all work to treat each other with more kindness, caring, good-will, and love. I know I sound like an idealist but that’s OK. I’m not ready to give up on this world just yet. We’re lost-yes. But we can be found with some help from above and by caring about each other.

I’d love to hear from you. Other than shipping all of the mean people off to their own plat of land in Siberia, what do you think would make this world a better place?

“You may say I’m a dreamer, but I’m not the only one. I hope someday you’ll join us and the world will live as one.”~John Lennon

Wife, mom, traveler, dreamer.
View all posts by okiegirlunleashed →
This entry was posted in Uncategorized. Bookmark the permalink.

10 Responses to What the World is Coming To