Love in the Bullseye

With so many friends’ marriages unraveling around me lately, I find myself even more thankful than usual for my incredible husband, Justin. For both us, it’s our second marriage and the decision to divorce our first spouses was a heart wrenching one. My parents will celebrate their 50th anniversary this year. His parents have been married for even longer so lasting unions are our legacy. Unfortunately, it just didn’t work out for us the first time. It breaks our hearts to see our friends struggle and make the decision to divorce because we know how tough it is.

When Justin and I decided to get married in 2006, we knew that second marriages have even lower chances of success than the dismal rates of first marriages. We felt like we needed some kind of iron-clad guarantee that we wouldn’t go through another divorce. But, there isn’t such a thing as a divorce-proof marriage, right? I was so afraid of another divorce that I found myself reading self-help marriage books when I was single! A great one I have bought for many friends and would highly recommend to everyone is Fighting for Your Marriage.

Well, there are no guarantees in life. First and foremost, God is the center of our marriage, which makes a huge difference. But, I do have a theory about love and how to make it last. Keep in mind that I’m no expert so if you need advice, I’m a big fan of seeking professional counseling. But I’ve seen enough relationships fail and helped far too many friends through their own divorces to know that my theory is a pretty solid one.  Are you ready to follow me on this?

People don’t just go to bed one night, perfectly happily married, and wake up the next, and decide to end their marriage. Little things add up over time that slowly drive people apart until they become really big, seemingly insurmountable things.

I like to visualize love as a great big dartboard. When you first fall in love, you’re both snuggled up in the bullseye. The only thing you may fight about is who loves the other more. That’s the infatuation stage but beyond that it grows into something deep enough that you decide you want to build a life together. Everything is close to perfect and you’re in the zone. You’re best friends. You treat each other with kindness, love, and respect. You can live like this for months or years, depending on your problem solving skills. 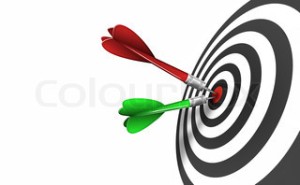 But, eventually, Mr. Perfect is going to forget to do the dishes, you’re going to be mad about it, and yelling will ensue. This is where the CFC’s (no, not the ozone destroying kind) of a successful marriage come in but I’ll talk about them later. So, while you’re fighting, you aren’t loving in the bullseye anymore.  Each ring away from the bullseye can represent unresolved issues such as hurt feelings, things that need to be shared, things that shouldn’t have been shared, unforgiveness, etc. For something as mundane as a fight about the dishes, hopefully, you just come one ring outside the bullseye, resolve it, and move right back in. For something more serious, you may be so upset with each other that you move several rings away from the bullseye. The point is that every time you move outside of the bullseye, you have to do whatever it takes to work through all of those unresolved issues to get back inside.  I’m serious when I say that you must work to get back to it for the duration of your marriage if you want to be happy.  Of course, real life is going to happen and your bullseye may look different in your 15 year marriage than it did when you were dating for 15 days.

I believe this is so important because when you love outside of the bullseye, one ring out may not feel so bad. You may even get used to it. It’s no big deal. Then you’re loving two and three rings out on a daily basis. You don’t remember what your relationship was like when you didn’t have any resentments toward your spouse. But, it isn’t so bad that you want to leave but you may not define yourself as “happily married” anymore. Everyone has issues, right? Then you’re loving four and five rings out. You’re fighting a lot more often. Pretty soon, you’re seven or eight rings away and barely on the board. Even if you wanted to, you couldn’t find your way back to the bullseye even if you tried.  You no longer know how to get back. You don’t even like each other, much less love each other because so much hurt has been built up that you just don’t think things could ever be good again. I believe they could with an excellent counselor and a lot of tenacity but this is where a lot of folks throw in the towel. Others may go on living this way for many years, in an unhappy relationship, becoming more like roommates than partners in life.

If you’re in the bullseye or anywhere near it in your current relationship, you just have to keep fighting your way back. Don’t wait until you’re eight rings away to make an effort. Work on your marriage every day, even when you’re in the bullseye, or just one ring out. Block out any negative influences that try to knock you out of the bullseye or aren’t healthy for your marriage. Don’t take it for granted that your marriage will work without putting any real effort into it. Many newlyweds think that they are never going to get divorced. That’s probably what EVERY newlywed thinks. That’s what I thought in my first marriage, too. They don’t realize that these everyday, unresolved hurts, build up over time and are really what lead to divorce. If you solve them when they are small and keep them from festering, your marriage will have a much greater chance of success.

OK now to the CFCs I mentioned earlier. They may be terrible for the ozone but they’re the key to a successful marriage. Let’s use the dishes example I threw out there before. It’s Mr. Perfect’s turn to do the dishes and he forgot. You have a few options:

Option #1- Choose Stubbornness- It’s his turn to do the dishes and you are NOT doing them! Don’t say anything to him about them but just let them pile up. As the plates overflow onto the counter, roll your eyes and stomp around angry.  A smell that resembles the water treatment plant begins to emanate from your sink after several days. You think an opossum may have taken up residence under the now fuzzy cake pan. Stand your ground. Your family moves to paper plates because all of the real ones are dirty/green.

Option #2- Choose Extortion- Even though it’s his turn to do the dishes, you do them anyway. But, when he gets home from work, the first thing you do is greet him at the door. You let him know that even though it was his turn, because he didn’t bother to do them, you did the dishes for him. Remind him of this daily for a week.  Charge some expensive shoes on the credit card as further payment for doing HIS dishes. (Note: Options #1 and #2 do not start with C, F, or C)

Option #3- Choose Communication- It’s his turn to do the dishes. You aren’t doing them. When he gets home from work, you lovingly say, “Hey honey, I think it’s your turn to do the dishes. Would you have a chance to get them in the dishwasher this evening?” End of story. No criticism, harshness, sarcasm, or anger. Just straight up communication. You can’t expect him to read your mind. Just tell him what you want. Have you tried it? It’s surprisingly effective. Communication is the first C.

Option #4- Choose Compromise- It’s his turn to do the dishes. Do them anyway. He’s been working extra hours lately and hasn’t felt well. You’ve got some time on your hands. Marriage isn’t about keeping score anyway. Just do them. When he gets home from work, if you choose to mention it, do so lovingly, and hopefully he will be appreciative. Yes, it’s his turn and he should do them. But, maybe he can do them the next two times. Maybe he sucks at doing the dishes and you need to rearrange your chore assignments if this is a constant battle. Marriage is a constant compromise. The more you dig in your heels and decide that you aren’t giving in, the harder it will be. Selfish pride has no place in a successful marriage but it has been front and center in plenty of divorces. Compromise is the second C.

Now for the F. I’ve saved the best for last. It stands for Forgiveness. I don’t mean the shallow “It’s OK” kind of apology acceptance. I mean the real, let go of all hurt, and resentments, I-will-never-throw-this-in-your-face-again-at-a-later-date kind of forgiveness that you will need to make a life long relationship work. You need to be an excellent apologizer and an even better forgiver in a marriage.  When you’re wrong, give a heartfelt apology. When you are wronged, accept the apology. 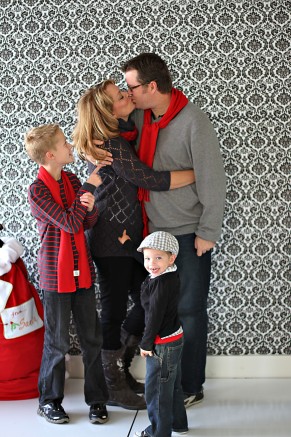 Photo by Stubbs Photography by Kim

By using the CFC method, you can resolve many conflicts and find yourself back to the bullseye in no time. So that, my friends, is my theory on how to have and keep a happy marriage.  It’s working for me and I hope it works for you, too. 🙂

About Rock & Roam with J&J

He is a musician/photographer for fun and a sales guy for work. She loves to write and is financial marketing. Together, they have built a life complete with two kids and two dogs. They love to travel as much as possible. You never know when life will throw you a curveball so live it now. Don't wait.
View all posts by Rock & Roam with J&J →
This entry was posted in Love, Marriage, Oklahoma, Uncategorized, Women. Bookmark the permalink.

7 Responses to Love in the Bullseye