Posted on September 22, 2012 by okiegirlunleashed

Even though my alarm was set for the unacceptable hour of 4 something a.m. I was still pretty excited about my first day of work back in July. I had a 7 a.m. plane to catch to San Francisco. If everything had gone according to plans, after a stop in Denver, I’d have been in Cali by early afternoon and was going to meet up with my trainer, Ingrid for a new employee orientation. But, as I have quickly learned, when it comes to traveling, you shouldn’t bet on things going like they’re supposed to go.

I arrived at the Will Rogers World Airport about an hour before flight time. I still wasn’t stressed about not arriving 2 hours in advance because OKC security is usually a breeze, especially at such an early hour. Indulge me for a second while I ask if any of you can tell me why both of our airports (Wiley Post is the other one) are named after dudes who died in a plane crash. Shouldn’t airports be named for people who flew exceptionally well and died from old age or something non-flight related?  Sorry, I digress.

Anyway, by the time I arrived at the ticket counter, there was one clerk and a line of people. I could hear the ticket clerk answering questions in a curt manner with a fake polite tone to her voice. Finally, by the time I got up to the counter it was about 35 minutes before flight time. She started to check me in, told me how much my baggage fee would be, took my credit card and then in the middle of the transaction she abruptly said, “I’m going to close this flight. I can get you on the next one leaving here at 2:15 p.m.”

At first, I didn’t understand what she was saying. Then, it hit me, she wasn’t letting me on this plane. She explained that she had a right to close the flight 30 minutes before flight time and that’s what she was doing. I explained that it was my first day of a new job and I HAD to get on that plane. She had just been taking my baggage fee. What happened?

“If your job was so important, you think you’d have gotten here earlier, wouldn’t you?” she sneered.

I begged, I pleaded, I smiled, I gave her my sob story (I left my job after 15 years, I can’t get fired on my first day of the new one), I tried to cry (Come on, Jen, think of Old Yeller! Or Up! Up! Makes you cry!) but I couldn’t muster any tears. I noticed her rainbow Pride bracelet and thought of gushing about all of my gay friends and how I was boycotting Chick-Fil-A but I could tell that would probably just make things worse. She was drunk with power over me and nothing was going to sober her up.

I asked to speak with her supervisor. She said she was the supervisor. I retorted that she didn’t own the airline and I wanted a name of a superior. She refused to give it to me. Until this point, I was caught in a delicate dance of kissing up as long as I thought there was still a chance of getting my way. I was finally free to stand up for myself once I realized that all hope was pointless.

By this time, the people in line behind me were realizing that I wasn’t getting on the plane and neither were they. A large and vocal Italian man behind me started yelling at the clerk, telling her she didn’t have to be so mean. The airport police noticed the commotion and came over to intervene. After we explained the situation, they ended up on our side! They begged and pleaded with her to let me on the plane. It did no good. The police officer told me that the terrible customer service of this airline is the reason they are off to one side, all by themselves at the ticket counter.

Finally, I did what I always do when I run out of options and need help. I called my husband. He knows everything! He gave me a few ideas: Could I fly without my bag and have it shipped later? (Nope! FAA regulations, blah, blah, blah) Could I buy a ticket on another airline? (Yes, for $800, so no…) Defeated, I had the evil ticket clerk book me on the 2:15 p.m. flight and I prepared to call my boss. Luckily, they just started my training on Day 2 and didn’t fire me.

Still in shock, I drove home from the airport in rush hour traffic. Other people were going to work. I should be on a plane going to my first day of work but instead, I was stuck in stop-and-go traffic just past Airport Road on I-44. Traffic in front of me came to a quick stop and so did I. WHAM! A truck behind me couldn’t stop in time and rear ended me. Did that really just happen?

I got out to survey the damage and was surprised to see that the guy’s truck who hit me was probably totaled. I guess I was still so focused on sorting out the fact that I was driving home instead of flying to California that I didn’t realize how hard he had slammed into me. Thankfully, he seemingly hit square on the spare tire on my SUV and my car didn’t appear to sustain too much damage. If I had to choose a guy to crash into my car as I was driving home from the airport after being denied entry to a plane for no good reason by a bitter woman, this would be the guy. He was the ideal accident- causer trifecta: very apologetic, concerned for my well-being, and properly insured.

When I got home, my husband greeted me at the door with a great big hug. I had left the house that morning ready to take on the world. I was ready to set off to San Francisco-by myself, like a big girl- to start the new adventure of a travel job. Instead of it going as planned, I was returning merely a few hours later with whiplash, a smashed car, and decimated travel plans. I literally crawled into bed and pulled the covers over my head.

But, as with any part of life, it isn’t going to be fabulous all of the time. I’m allowed to  wallow in my misfortune for a bit but then I have to get over it. Yes, it could have gone better. But, it certainly could have been worse. As I look back, it is kind of a funny story. You just can’t make this stuff up.

Not to keep you in suspense, here’s how the day ended. I took some ibuprofen because I wasn’t kidding about the whiplash. I was sore for a few days but had no lasting injuries. I rested for a while and was thankful that I had an extra shot at a nap since I had gotten up at 4 something a.m. Then, I had a lovely lunch with the hubs. That was a nice bonus that wouldn’t have happened if I’d made it on the plane.  It almost made me thankful to have missed the plane, but not quite.

My afternoon flight was delayed several hours and my Denver connection was delayed, too. I finally made it to San Francisco around 11 p.m. PST which felt like 1 a.m. to my Okie body. A crazy cabbie drove approximately 97 mph between stop lights 1 block apart and weaved in and out of traffic on the way to my hotel. It really made my whiplash feel awesome. I was never so happy to arrive at a hotel in all of my life. My bed felt like a cloud and I slept like a rock.

I have been traveling a few days a month for my job for nearly two months now. I’ve experienced a few delays and cancellations. Nothing and I mean nothing has even come close to being as bad as my first day. In a weird way, I’m glad it started off with a true test of my mettle. Not once did I think that I’d made a mistake by agreeing to travel for work. Instead, it made me think, “Oh, you’re gonna be like that, are ya?” I can do this. I can do anything. And I will.

Travel lesson learned: Get to the airport early in case you encounter a mean lady who gets drunk with power. Don’t put yourself at her mercy by cutting it close on boarding time.

The Golden Gate Bridge is in here somewhere… 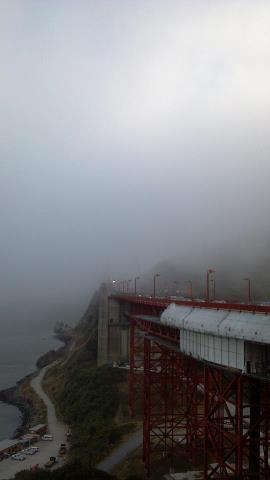 Wife, mom, traveler, dreamer.
View all posts by okiegirlunleashed →
This entry was posted in Oklahoma, Travel, Women and tagged Travel. Bookmark the permalink.